LEAFS BACK FOR ANNUAL BONDING GOLF AND PRACTISE STAY IN GRAVENHURST 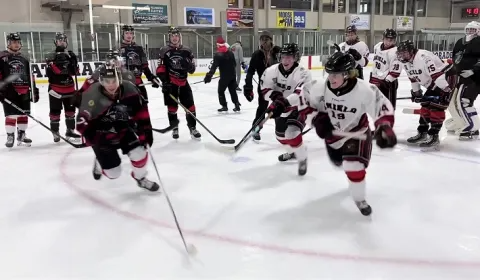 GRAVENHURST — After good win over the Habs last night, the Leafs continue their fall pre-season camp with a return visit here today. Toronto’s 5-1 win over Montreal is being rewarded by coach Sheldon Keefe with an annual boat cruise, some golf, and the usual bonding exercise.

The rural rink, where their hockey bags were unpacked Tuesday, will be their home base for three days — a Thanksgiving retreat ahead of another preseason tune-up Friday in Detroit. Practices generally closed to the public are being opened Thursday morning at 11 a.m. for school groups to watch the hustling workouts. Players, who was holed up with the team in the new Muskoka Bay Resort Hotel in West Gravenhurst, were out shooting a round on the course on a gorgeous Tuesday afternoon.

A member of the team entourage was spotted running the roads of the large and expanding condo community. They will hold two more morning and afternoon hustling workouts Wednesday. Meanwhile, at the Graeme Murray Arena team staff had already brought their gear into several of the dressing rooms. And the ice surface boards were already festooned with advertising.

Leave it to the Leafs not to miss a chance to capitalize on the media and fan cameras that may catch a background glimpse of the ice surface surroundings. You couldn’t miss the huge word Gatorade with its dominance among multiple advertisements including Adidas, Ford, MasterCard and Sport-Check. The local Muskoka Shield Jr. A team was hard at work practicing for Friday night’s season home opener against the Bancroft Rock Hounds, who they lost 6-4 to in their third game of the season. The GMJHL team is 1-2 now.

Minor hockey teams also got to practice later this afternoon in the new surroundings.